A radio personality in Houston spent the summer talking about Armor Glass. Now he wishes he had taken his own advice and had it installed BEFORE his house was broken into.

Here is JP Pritchard, in his own words (60 seconds):

After the break-in, JP asked for a quote and was surprised how reasonable it was. We had it installed in no time. He later said: “We didn’t leave the house for a week after the break-in, not until we have Armor Glass installed. Only then did we feel comfortable going away with no one home.”

Contact us today for a FREE quote. Don’t wait to lose your valuables before calling.  JP and his wife will not recover a lot of property worth more than what Armor Glass cost to install, not to mention those sentimental valuables.

Last week, Houston radio personality JP Pritchard was in Brenham when he got noticed that his home alarm system had gone off, but it was already too late. When he and his wife got home, the thieves were long gone along with their loot.

JP called us and this week we installed Armor Glass security film throughout his house. It reinforces the weakest link – their glass. That is how they broke in. In fact here is a photo of the window they broke to get in – its one I would not have assumed they would break:

Moral: VIDEO cameras don’t keep the bad guys OUT. ARMOR GLASS DOES. Call for a FREE quote today. JP is endorsing us.

The irony is that is cost a fraction of what he thought it would – and far less than what was lost.

A radio guy who shall remain nameless endorsed our product in a series of ads that ran this summer, but I could not get him to let us give him a quote. He assumed it would be “too expensive.”

Well, today I got an email from him – a couple days ago while he and his wife were gone someone broke into his houses and stole his wife’s jewelry, etc. He got the call when he was out of town – and the video recorded it all. But video cameras don’t stop break-ins; they only let you know that you are in the process of being robbed. By the time police arrived, the thieves were long gone.

Now he wants a quote. It was a wake up call.

(It turned out that the quote worked out to be only $2,500 for his house, which had about 18 windows–quite a bargain versus the loss.)

The surprise: the burglars didn’t break the big glass in the front or back, as one might assume. They picked a small kitchen window that was six feet off the ground and only 13″ x 28″! One cannot assume “which” window they will strike, so do all of them.  It beats living in fear and being vulnerable.

Check out our Brand NEW website that is set up to work with every type of device. Don’t delay asking for your free quote (before its too late).

One of our customers had someone try to break in his (front) glass door armored with our film. This week. A neighbor saw it unfold and called the police as she watched. We just got these photos from John N who lives in Houston.

The burglar used the homeowners own ADT sign shaft as the break in tool! Normally it would have worked. One good whack and the glass goes flying.

She said he worked on getting in for 8-10 minutes, long enough for the police to come arrest him just as he finally breached it.


Yesterday we did an installation for another homeowner, John D, who lives in far west Houston. Thieves hit his house twice in 2 days, breaking a living room window in the back. He even wants us to put it on the glass on his business.

It pays to Armor your glass. If not for us, the burglars would have broken glass and been in and out in less than 3 minutes…contact us for a FREE quote today.

It’s on homes for retired teachers, astronauts (some of our clients are currently out of this world), engineers, ordinary folk
everywhere, Rice U, etc.

It’s on my place. I am not about to live in a ‘house of straw’ these days.
www.ArmorGlass.com

Got an emergency call yesterday – a chain store that had been robbed multiple times. The Crooks break the glass and run in, grab stuff, and run out — all in one minute!

Finally they did some research and called Armor Glass – had a crew there the next day (today) to ‘armor their glass.’  Should be a big surprise the next time someone tries to break in that store… 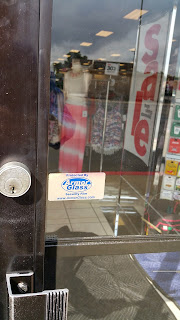 And then there was the TORNADO in Giddings, TX. This is a great example of what Armor Glass can prevent – injuries from flying glass after breach by a tornado or hurricane… 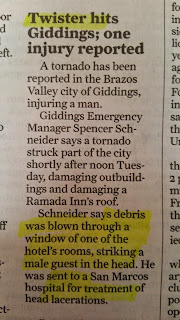