20 April 2015
For Immediate ReleaseHow is it that one house is not destroyed in a storm when those next to it are? 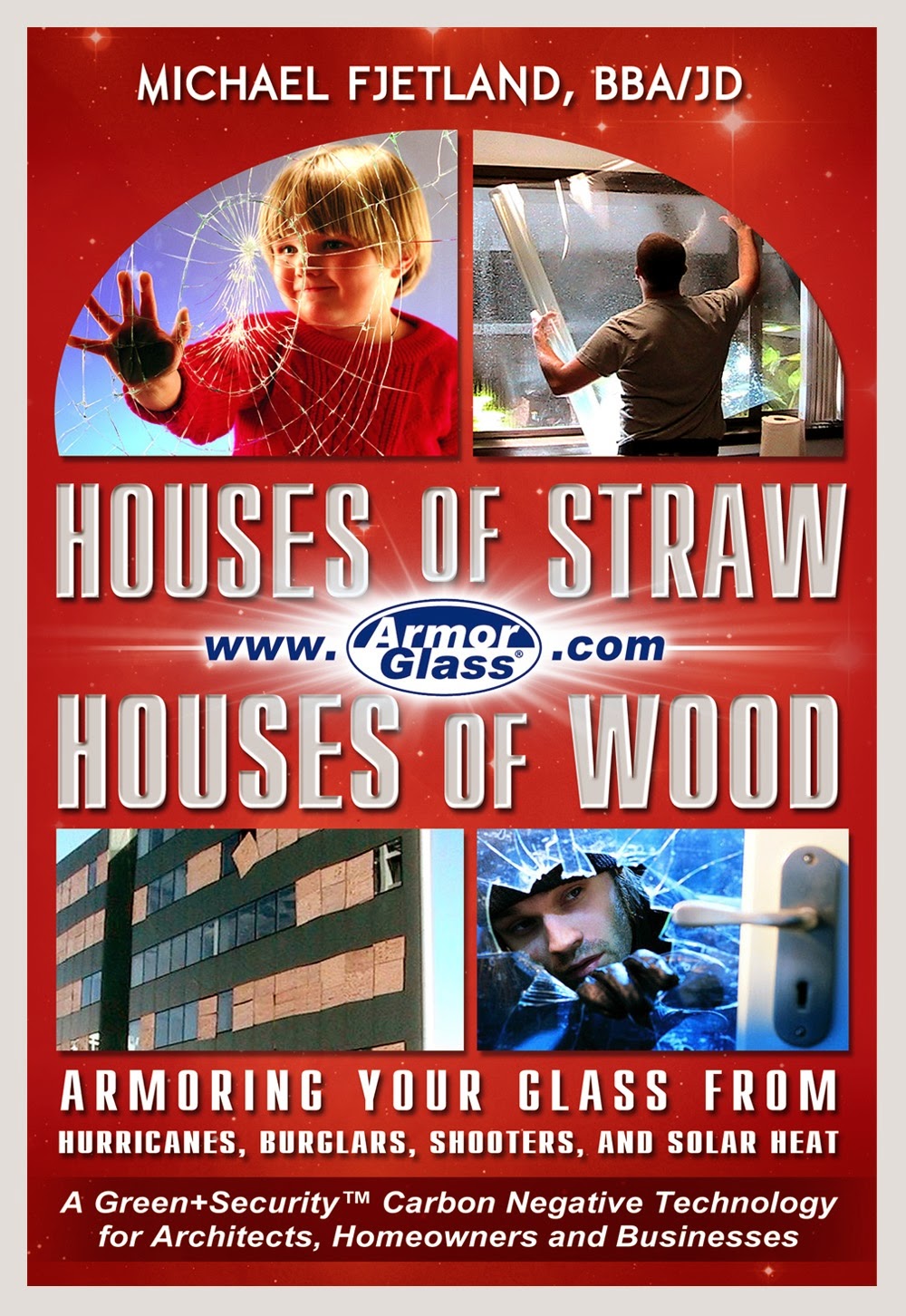 “Houses of Straw” is a FREE EBook that describes how buildings are destroyed by hurricane-force winds — and how to protect them using a technology that pays for itself over time in energy savings. Same technology was used after 911 on DC federal buildings.

“Houses of Straw” can be downloaded at https://armorglass.com or at this Lulu link:

I just sent this letter to our Texas Senators and Representatives, trying to get them to upgrade our building codes to protect Texan lives and property.

I invited them –and invite you– to join us any time the next 3 days at the Texas Home Show at the George Brown Convention center in Houston March 27, 28 & 29 – to see a life saving technology that keeps houses intact in hurricanes and kids unharmed from broken glass. We are at booth #837. Here is the letter:

I wrote to members in 83rd Legislature in 2013 about upgrading our building codes after a tornado ripped through Moore, Oklahoma and an explosion ripped through West, Texas. I am writing again because some experts are predicting that the 2015 Hurricane season will be the most dangerous in ten (10) years.

Yesterday tornadoes were once again ripping through Oklahoma. They also threaten millions of Texans who still live in “houses of straw” that are regularly breached by burglars breaking glass and hurricane-force winds. Coastal Texans remain vulnerable to high winds, yet are told they must remain vulnerable or buy extraordinary-expensive shutters or impact glass most cannot afford.

On February 18th, 2015, I wrote requesting your consideration of giving building owners an insurance discount for upgrading their buildings to withstand hurricane force winds since studies have shown glass breakage by wind-borne debris is what leads to structural failure, not to mention internal damages, mold and months of reconstruction that could have been avoided by updating our building codes and using lower cost protective technologies available on the market.

The losses to homeowners and insurance companies could be drastically reduced by adding a simple technology that was used on the federal buildings in Washington DC after 9/11. It is explained in a book entitled “Houses of Straw Houses of Wood” which is available at this link: www.ArmorGlass.com

I have supplied proposed language to Sen. Taylor and Rep. Paul (from my district) for your consideration. The same technology would also save people money by cutting their solar heat, which cuts their energy use. It would eventually pay for itself, unlike most technologies I am aware of.

As a strong advocate of energy efficiency, I also endorse passage of HB 2392 and HB 3363, bills which will facilitate sustainable financing for residential energy efficiency. Additionally, I suggest that HB 1736 either be modified or rejected since it would slow the adoption of new building codes in Texas which are desperately needed to take our buildings to the next level insecurity and efficiency. I endorse the following modifications to HB 1736: 1) Remove the 6 year waiting period for adoption of new energy codes, 2) Include the immediate adoption of IECC 2015, 3) Remove the bill’s applicability to commercial buildings, 4) Allow local jurisdictions to adopt more stringent codes if desired, and 5) Ensure that the Texas A&M Energy Systems Lab approval is required for any alternative approach to current energy code requirements.

If any of you will be in Houston this weekend and want to see what security window film technology looks like or wants to ask questions, Armor Glass will be at the Texas Home Show at the George Brown convention center Friday 2-7 p.m., Saturday 10 -7 p.m. and Sunday 11-5 p.m. Booth #837. We have a few complimentary tickets; if you wish to have one, let us know at 713-213-5080.

Thank you for your consideration
Very truly yours,