Compare the results to the photos below of what happened at Sandy Hook that had no armor glass protection on its windows.

You will notice that the result is similar to the shooting in Chattanooga in which film like Armor Glass saved the people at the first attack site.

Photos show that –despite numerous shots into the windows– he was unable to penetrate the building to reach the people inside.  Normally a couple shots will blow out glass, leaving an empty frame – like at Sandy Hook.  So he gave up and went to a second place in his car where people were caught outside and killed.

We made it into a short video (2 1/2 minutes) to show you what happens.  Note that is does NOT stop the bullet but it does prevent the glass from blowing out after a couple of shots.

WHY is this important? Look at this photo from Sandy Hook elementary school. It shows that the glass was shot out next to the door – the shooter was inside in less than a second.

Here is a close up…

That may not impress you but it SAVED LIVES just a couple days ago by keeping an ISIS-inspired shooter from entering this recruiting center in Chattanooga.

Read “Houses of Straw” at www.ArmorGlass.com

This article describes a gang of robbers known for violent entries of businesses wearing masks and waving handguns. They put cocked guns to people’s heads in brute force to accomplish their mission.

The Smoke Shop owner was lucky but let’s face it — not too many people would be able to do what he did. What if he didn’t have a gun? What if he hadn’t seen them coming until they were inside?

Even if the Smoke Shop owner had locked the doors the robbers would have smashed through the glass in one second–just like the Newtown shooter– and would have immediately been on top of the people inside. They would have no time to react. 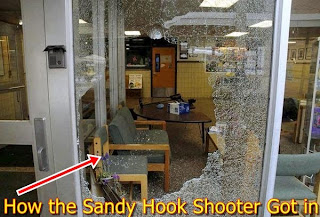 But there is a way of giving them that precious advantage of time.  Armor Glass security film would stop them cold–IF the doors were locked (automatically or manually) before they got inside.

It “armors the glass” so it becomes a barrier, giving people inside the building time — to take cover, call 911, grab a gun — all of the above.  It keeps them separated from the thugs on the outside, even if they were shooting at the glass, only to discover that all they can do is make small holes in the glass the same size as the bullets –too small for them to get through if the door is locked.

If they stand there trying to shoot holes big enough for them to enter, they will run out of bullets and need to reload. Glass has never been a problem before, so they are confused. The police have more time to come and engage. People inside have more time to take cover and protect themselves.

It’s time people with ordinary window glass don’t have. That is why everyone in the world with glass needs Armor Glass security film protection.  Yesterday, several million people were threatened by tornadoes, sheltering in “Houses of Straw.”

It’s the first time in 5,000 years that we have “armored our glass.”  Until then, don’t throw stones at glass palaces.  Let us protect your castle.