Something very ODD is going on this year. Normally hurricanes season “starts” June 1 (ends Nov. 30) but we don’t see a thing until August or Septemer.

NOT this year – we had a couple storms in the Pacific BEFORE hurricane season started. And now we have Tropical Storm Barry coming out of the Gulf of Mexico and hitting Veracruz – probably tomorrow. 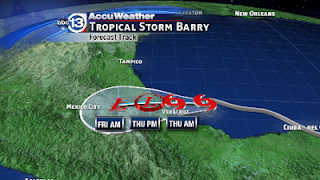 This is a Bad Omen for this Storm Season – its way too early for storms, yet we are already getting them. So what is it going to be like when the PEAK hits in a month or two?

What I am seeing is that a lot of people have fallen asleep this year. They are not preparing for hurricane season like they have in years past. They are buying cheap solar film crap that doesn’t keep windows from blowing out during hurricanes – which leads to roof loss. Everyone seems to be thinking “tomorrow tomorrow” as the song goes.

Then it will be too late. You can’t just throw together window protection at the last minute when one is rolling our way. Windows are the weakest link of every structure. Lose a window and you can lose your house. Project “Safe Windows” study of the 2004 Florida hurricanes proved it.

What is your house worth if destroyed because it had unprotected glass? What is your family’s security worth? Tropical Storm Barry showed another thing – don’t count on a lot of time to prepare. The warning could be less than 24 hours – just like Barry.