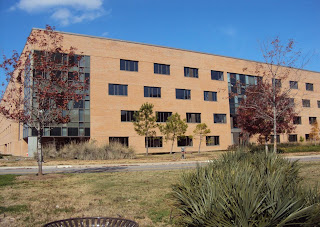 Above: Weiss Dorm, Rice University AFTER Armor Glass solar security film added – the only building on campus where students can “shelter in place” during hurricane…

When I was working at Rice University in Houston I needed to find a way to shelter my on-campus students in place during a hurricane or other high wind event. Shutters, security screens, other window film, specialty windows and frames, etc were all examined.  None of these products were aesthetically pleasing, cost efficient, long-lasting or could be put up fast enough.  I wound up searching for several years before I found Armor Glass. Not only did Armor Glass apply to our existing windows and frames, it also had the added benefit of cutting the thermal load of a building while still letting the light in. For instance, we had a building where the residents had to keep their bedroom doors open to the living room all the time or the rooms would get hot. Extremelyhot.  I recorded temperatures of 110-120 degrees in there, even with the A/C blowing. The students therefore didn’t have privacy, were not comfortable, and the A/C was at maximum load.
We tested Armor Glass along with 3 other competitors films. You could tell immediately when we put the Armor Glass film in-the temperature dropped immediately and the kids loved it since it still let the light in. Honestly I was stunned. It did better in all of our categories than the competitors and provided the necessary protection so that my students could shelter in place in their rooms.
We decided to install Armor Glass in all of our rooms with temperature problems and I’m glad we did. When I checked the energy usage for our A/C system for that building we saw it had dropped like a rock and was staying low!  We calculated that the payback would easily be between 4-6 years.  This is great because Armor Glass had the only 12 year commercial warranty against cracking, color change, bubbling, fading, etc. That beat all the other film companies, who only had warranties between 90 days to 3 years.  Also, none of their other warranties had guarantees against cracking, color change, bubbling, fading, etc that Armor Glass did.  We already had one building, Jones Hall, whose windows were a mess because of a cheap tint film, but we were glad we wouldn’t have that with Armor Glass.  Before I left this job we installed Armor Glass in several more locations around campus that had heat and security  issues and it worked out great.
In short, here is what I love about Armor Glass:
·        Great warranty-12 years!  No cracking, peeling, bubbling, color change, etc.
·        Reflected, not absorbed the heat, so the windows and room stayed cool.
·        Aesthetically pleasing-our head architect couldn’t tell which windows it was on when we did our tests!
·        Great ballistic protection, especially against multiple hits. It stays in place without penetration into the room.
·        We didn’t have to spend money in overtime and scramble to take down or put up window protection-it’s already there!
·        UV screening protected furniture and carpets from fading.  Exceptional visual clarity too!
·        Quick installation – the building was completed ahead of schedule.
·        Fast payback-the windows will not only protect but pay for themselves with the energy saved on cooling costs.
·        Great customer service – if there was any question with installation, they just redid the window for free. No hassle, no fighting.
·        It gets the job done.
If you don’t believe me,  feel free to contact me.  If it helps demonstrate how much I love this product I installed Armor Glass in my wife’s Mustang (no discount-I paid full price) because the car was so hot  that we had to have the A/C going for a while before we could put my kids in their car seats without them getting burned.  I was also worried about theft since she had such a valuable vehicle. The same day we got the film in she asked me “Why didn’t we do this sooner?!”.  The car was much cooler and we didn’t have to worry about someone trying to break in the windows and steal it.
When I buy a house I’m having all of the windows fitted with Armor Glass before we move in.
Mark Chaszar

Thank you Mark! The other thing I remember Mark talking about was that during Hurricane IKE (2008) they moved students from one glass building to another – but realized that they had the same vulnerability to broken glass. So they picked our security solar film that also is rated for a Large Missile impact – so students can now shelter in place in the dorm without risk of glass flying from a broken window…