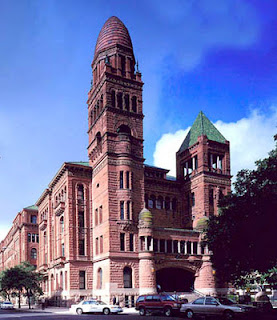 Authorities in San Antonio discovered five (5) men who had broken into the Bexar County courthouse.

They were from French Morocco and had maps of infrastructure in their possession. Apparently they had been traveling the country and collecting these maps as they went.As a former TV terrorism analyst, it raises the prospect in my mind that they were doing intelligence for a future terror attack on U.S. infrastructure – looking for ways to do the most damage, perhaps blowing up a pipeline or other significant target. It’s hard to figure out what else they were doing there. Morocco is known for “free lance terrorism.” That is defined as “lone wolf” types who are not part of Al Qaida but who want to do similar acts.How did they break in?

I have been inside the Bexar County courthouse. Check out the photo. All it would take is breaking a window on the first floor. Needless to say, the courthouse does not have Armor Glass security film protecting it…Stay tuned.