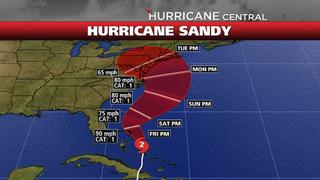 We have an unusual October Surprise – a CAT 2 Hurricane named Sandy that the weather forecasters say will hit the Northeast – and could knock out power to “tens of millions” of people – right before election day.

“What kind of impacts are we talking about?
Destructive winds, heavy rain, major coastal flooding and beach erosion would pummel portions of the Mid-Atlantic and Northeast regions between later Sunday and Tuesday of next week. Of course, the high winds would extend inland, with the potential for downed trees and powerlines. Widespread power outages could last for days.

This setup could even wrap in just enough cold air on its western edge to produce wet snow, possibly heavy, in some parts of the central Appalachians (mountains of West Virginia and Pennsylvania).
Residents from New England to New York, Pennsylvania, New Jersey, Delaware, Maryland and Virginia should remain vigilant and be prepared to take action in the next few days.”

Normally Hurricane season is long gone before it officially ends November 1 – but in this case, the extra heat has produced a late season powerful storm that will disrupt MILLIONS of people in the Northeast – as far inland as Maryland and Virginia.

What impact this storm could have on a close election is hard to say – STAY TUNED!