NASA: Warmest Decade in History. 2010 Could Be Warmest on Record 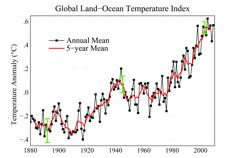 According to NASA “The near-record temperatures of 2009 occurred despite an unseasonably cool December in much of North America.”

That means that solar protection from intense radiation will continue to be necessary to obtain heat relief, especially with older glass that is not low-E.

NASA “estimates that there’s a good chance 2010 will be the warmest year on record if the current El Niño persists….Warmer surface temperatures also tend to occur during particularly active parts of the solar cycle, known as solar maximums, while slightly cooler temperatures occur during lulls in activity, called minimums.”

“In 2009, it was clear that even the deepest solar minimum in the period of satellite data hasn’t stopped global warming from continuing,” said Hansen.

What about global warming? “There’s a contradiction between the results shown here and popular perceptions about climate trends,” Hansen said. “In the last decade, global warming has not stopped.”

With or without warming, we are due for another Hurricane season starting June 1. Are you protected from the sun and hurricane-force winds?