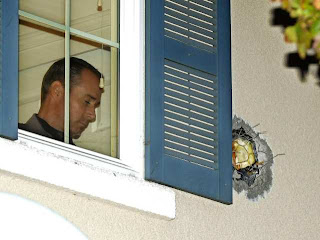 Here’s another reason to have Armor Glass Security film on your windows – Loose Cannons! Here’s the story and article link:
http://latimesblogs.latimes.com/.a/6a00d8341c630a53ef015437fa9d7a970c-pi

Mythbusters cannonball
A cannonball fired by the “Mythbusters” TV show plowed through a Northern California house, struck the roof of another house and smashed through a minivan’s window in a science experiment gone wrong.

The mishap occurred Tuesday while the Discovery Channel show was testing out whether other materials are just as effective as a cannonball when fired from a cannon.

Instead, the mythbusters learned how effective a cannonball can be when it misses its intended target, according to KGO-TV San Francisco.

The cannonball was fired from a bomb range in Dublin, about 35 miles east of San Francisco in Alameda County. It was supposed to hit trash cans but instead soared 700 yards into the home of a sleeping couple, leaving a 10-inch hole in the bedroom wall.
The cannonball was traveling as fast as a bullet. It exited the house, bounced across four lanes of traffic, struck the roof of another house and then smashed through the window of a parked minivan.

No one was injured.

Neighbors said “MythBusters” often tries its experiments in the area, and they have grown used to hearing explosions.”

Well, now you’ve heard it all. P.S. Armor Glass Security film HAS passed the “Large Missile” test! (Just in case “Myth Busters” are shooting off any cannons in your neighborhood!)