London Riots – Coming to the U.S.? 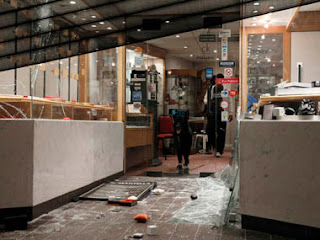 Could the London riots come to the U.S.? Gangs of jobless young people have been on a ramage the past three days, smashing glass windows with baseball bats and rocks, and stealing anything they could get.

Could this same problem come to the United States? The London riots were led by young people – 20% of them are unemployed. Huge pockets of “have nots” live near the “Haves” in London. When a man was shot by police, the neighborhoods around London exploded as mobs coordinated looting with their smartphones.

Could the London riots come to the U.S. as Congress continues to cut budgets and unemployment and summer heat brings frustrations to the boiling point? Very possible.

How many shop owners here would be as vulnerable as those in London? Almost all of them.

In the meantime, Houston is baking under triple digit heat. The Chronicle’s Eric Berger said: “If you liked yesterday’s 102 you’ll love today’s 103!” Our solar security film’s could cut that heat in half 0r more, and save you energy costs at the same time…

It’s another reason Armor Glass is a miracle technology, serving multiple purposes to protect people and their property.