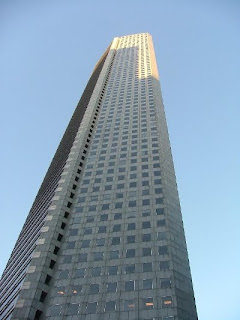 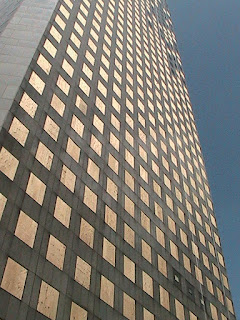 Notice the difference in photos.

The first is a photo of how a LEED building looks after a hurricane — with Armor Glass security film and attachment installed.

The second is a photo of how a LEED building looks after Hurricane IKE without Armor Glass security film and frame attachment (note the plywood replacing windows which were sucked out during IKE, not even a CAT 2 or above storm).

Notice the difference? The difference is millions of dollars in losses to the building owners and occupants, water damage and months of reconstruction –all could have been avoided using an Energy Star security film from Armor Glass.

Single pane glass, double pane glass and Low E glass: none are breach resistant. Armor Glass security film makes each of them hurricane/tornado/burglar resistant. They also save enough energy to pay for installation.

Armor Glass films are a way to make windows “low E” at a fraction of the cost, while “armoring your glass.” Our films are “carbon negative” – it costs less to make them than what they save in energy.

A building loses 40% of its energy through its windows, which are often left unprotected and untouched in most LEED certifications for buildings located in a hurricane or tornado zone.

Which is better – to have a LEED building fighting hurricane force winds with Armor Glass security film, or without?

Ask your insurance company and tenants who lost windows during IKE…