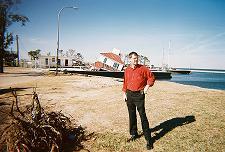 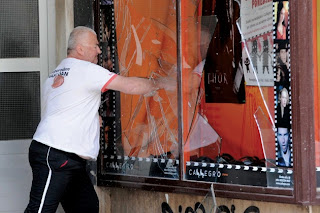 We put our Security Film on a Judge’s house today – I won’t say WHO or WHERE. But I will say that he has been threatened; people have tried to break into his home.

There is nothing more vulnerable then bare glass.  He was also putting on the “Ultimate” Lock. Smart move also. When they can’t get through our film they often resort to breaking the lock. Usually people have a flimsy one with a tiny faceplate that a crowbar will break in seconds.

The judge said that two or three nearby houses had been broken into recently in the same neighborhood (NICE neighborhood I CAN say). That same story is EVERYWHERE.

That is what happens when wealth becomes so concentrated and jobs so scarce by the lack of investment in infrastructure etc.  When people have no access to a job and money, they resort to taking others – and that means going to the most affluent.

Or going after someone who ruled against you in the past.

Security is here to stay, until such time as hurricanes no longer form, burglars no longer need to take other peoples’ stuff and the sun no longer blows triple digit heat our way…

There is only one product that tackles all three jobs: Armor Glass Security Film, in both Clear and Solar+Security choices.

The quote is FREE so what is holding you back from contacting us?  Is Delay ok? Is time on your side. Unfortunately, no…