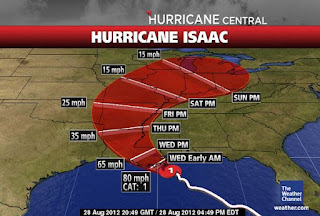 The hurricane verdict is in – ISAAC has decided to give New Orleans a big Wet Kiss as a CAT 1 – minimum hurricane compared to the monster Katrina that hit 7 years ago on the day.

The next photo is me, 7 years ago, standing in front of some of Katrina’s wreckage. It was an avenging angel of death to thousands of people caught in failing levees and a monstrous size storm – a deadly combination of Mother Nature’s Fury and Mankind’s houses of straw and wood. 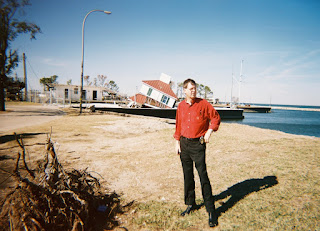 ISAAC will test the NEW $15 billion levee and pumping system built after Katrina overwhelmed their ragtag system that was inadequate for the job of fending off hurricane-force winds and rain. But the question is – How would it do if ISAAC were more like Katrina – a CAT 3 or 4?

I heard of one man who had rebuilt his house in New Orleans with six inch walls of cement and windows that will take 200 mph winds.  Even he did not plan to ride out ISAAC in the home.

Better to shelter further back from hurricane wind-and-water and be safe, then sorry. Get back and “Hunker down” until the fury passes.  New Orleans just closed their massive NEW Flood Gates for the very first time.  This shows the difference it makes when government investment in systems to protect our people and usable property from nature’s rages.  Huge amounts of America’s trade worth hundreds of billions of dollars leaves the U.S. through the Mississippi River – and its southern most port city, New Orleans, which actually sits BELOW Sea Level (like HOLLAND), so it needs Massive Pumps to stay high and dry.

The rising water is the second deadly killer –after tornadic winds breaking cheap windows and blowing apart our houses because no one reinforced the weakest link in our houses of straw, wood and brick.  Then you get the water and mold and months of reconstruction hassle.

Who wants to risk the suicide mission of hanging heavy plywood on 2nd story windows – hanging on the edge of a ladder, putting them up, taking them down, repeat – all the time. Instead of that with Armor Glass Security film which would be there working 24/7, 365 days a year.  Is it obvious which is better? Plywood won’t stop burglars or solar heat. Armor Glass security film does. And cuts dangerous UV 99%. Plywood and shutters don’t do that.

Do you remember the story of the Three Little Pigs – one built a house of straw; one built a house of wood and a third built his of brick? When the big bad wolf came along, the pigs in houses of straw and wood became the wolf’s dinner. The pig in the brick house survived. The rest of us little pigs must upgrade our dwellings to become more robust to withstand Mother nature’s extremes (and human intrusion) – now that even the weather has become extreme, from Drought to Hurricanes. 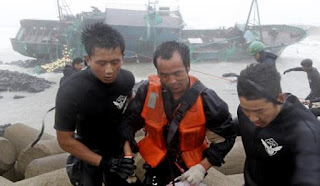 Today Asia, including America’s base on Okinawa, Japan, Korea are being hammered by a Katrina Monster of their own. China will be hit by it next (they are called “Typhoons” on that side of the world, but it is a Hurricane CAT 4).  This is a global situation of more intense storms and weather. We have to harden our structures or suffer the same fate as the “Three Little Pigs.”

We need to armor what we have, upgrade our building codes to meet the threat – whether its hurricanes or burglars breaking easily through glass windows, causing destruction and heartache and headache that could have been avoided simply by putting a certified security film like Armor glass you your windows.

Our thoughts are for all of those now trapped in New Orleans with whatever protection they have. Let us hope it is enough to survive. No one should delay armoring their little pig houses now… before the next Big Bad Wolf comes calling…