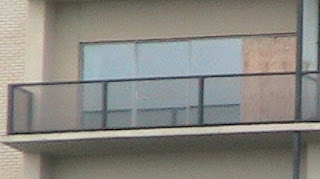 Top: unprotected glass on a high rise condo that broke during Hurricane IKE 2008 – inside received water damage, etc (all the way down to the first floor). 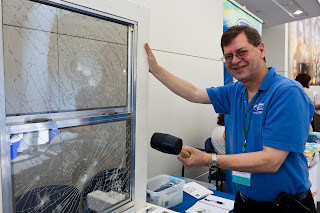 Above: Ordinary single pane glass with Armor Glass security film coating will take a beating with a hammer and still keep out water and wind… 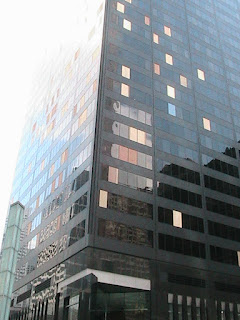 Above: Even commercial buildings lose windows from debris strikes during hurricanes, costing millions in damages from water, etc.

Since it appears that ERNESTO will soon be a hurricane bearing down on the Gulf of Mexico, its time for an explanation of how hurricanes destroy buildings.

After four hurricanes struck Florida in 2004 a study was launched called “Project Safe Windows.”  They were amazed that some houses remained intact while others next to them were completely destroyed.  Why?

The answer was simple: Windborne debris.  With hurricane force winds you also get flying debris. Glass can flex up to a point, but it will break if it passes its tensile strength, usually when a piece of debris – gravel or a tree limb — hits it.

Buildings are designed to withstand EXTERNAL pressure, not internal. Once the wind gets inside, it tries to find a way OUT.  The easy way is for it to UPLIFT the ROOF. It basically blows the house apart. Tornadoes do the same. One Conoco Phillips engineer (whose house we did) told me that he calculated that a hole in your window was enough to produce 50,000 lbs of UPLIFT on the roof!

Avoid the breach of your buildings weakest link, its windows, avoid losing your house (assuming you are not in a water surge area).  That why Armor Glass security film fills an important purpose that until now was done by plywood, an outdated technology that makes little sense – ever try carrying a heavy piece of it up a ladder in a wind?

(More Details in our forthcoming book).