How Hurricanes and Tornadoes KILL Buildings – Because of a 5,000 Year Old Technology 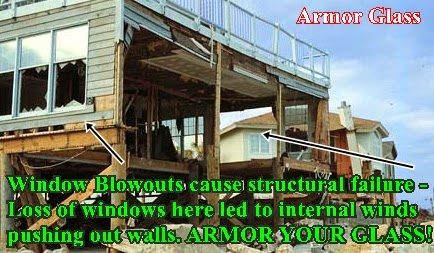 Architects still don’t know about it. Building owners and Homeowners have no idea. It’s the hidden threat to their safety no one thinks about.

They live through hurricanes, tornadoes and burglaries year after year not realizing their six figure investment in their building or house is at risk for one simple reason.  It depends on a 5,000 year old technology that a baby could break – its window glass.

How does a hurricane or tornado destroy a building?

A study of the four 2004 hurricanes that struck Florida called “Project Safe Windows” found the dirty little culprit is WIND-BORNE debris, breaking the windows. The winds penetrate the structure, seeking a way out (while opening it to water damage, mold, etc.) The easy way for the wind to escape is by uplifting the roof. The walls blow out, as shown in the above photo.

But those buildings with window protection SURVIVED.

Architects know that buildings are designed to withstand external winds, not internal pressure. A broken window opens the gates of hell, dooming the structure to destruction or severe damage, inside and outside.

To protect your biggest investment, ARMOR YOUR GLASS since it is the weakest link of every structure.  The easiest and least costly way to do that is not by shutters or heavy impact glass, but by applying Armor Glass security film to the inside of each window. DONE. It’s 24/7 protection 365 days of the year.

What about tornadoes? Tornadoes are condensed hurricanes, with even higher winds. Tornado winds do the same as hurricanes, hurling debris through glass, causing it to become a thousand shards of shrapnel and exploding the structural apart.  While nothing can protect a building from a direct hit by a tornado, Armor Glass can protect nearby buildings with windows that are hit by wind-borne debris.

Armor Glass film is explosion rated. We have put it on offices housing government offices requiring that level of protection. We have applied the identical film to homes of teachers and astronauts.

It comes in both clear and tinted versions to cut solar heat, paying for itself in energy savings. It has prevented break ins of our customers by burglars. It has been applied to schools for shooter protection (delaying entry).

Check out the videos of how it works on our website. Ask for a Free quote.

Don’t let your home or office end up looking like the house above. Armor Your Glass to protect your biggest asset. It will pay for itself in more ways than one. It’s carbon negative, saving more energy than it takes to make. That makes it “Green+Security.” What’s there not to love about that?