Gas Explosion in MA – Another Reason for Armor Glass 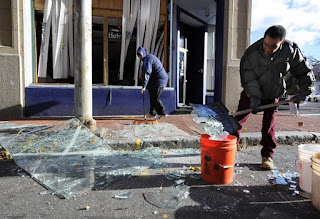 A natural gas explosion in Springfield Massachusetts blew out windows in over 40 buildings this week.

Windows were blown out for blocks. Had the buildings been “armored” with Armor Glass security film, the people inside would have been protected from flying glass (the explosion happened after hours, which prevented many injuries). After all, our security film is explosion rated (3a/3b, Level 2). That’s why its on the Pentagon and the DC federal buildings!

Also, no one would be running around right now trying to “board up” empty window frames.  The film would hold it it all together until the glass was replaced.