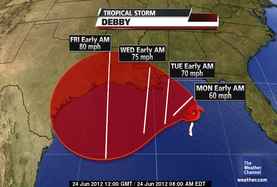 The weather experts say that Tropical Storm “Debby” will spend the week in the Gulf of Mexico and is expected to track WEST towards Texas.

That could change but it is a reminder that hurricanes are unpredictable and you should be prepared regardless. This has been a strange year in which we had two hurricanes form even before the June 1 beginning of hurricane season!

“It was the first time four tropical storms have been recorded before July 1 during the Atlantic hurricane season since record keeping began in 1851. Alberto was the first storm this year. It formed off the South Carolina coast on May 19, almost two weeks before the hurricane season officially began June 1.”

According to the Houston Chronicle’s Eric Berger “in the 62 years since 1950, the average date of the “D” storm forming in an an Atlantic season is August 25″ – two months from now! “The average “D” storm has an intensity of a CAT 1 hurricane.

In 2008, when Hurricane IKE hit Houston in mid-September it was a CAT 1, yet it caused billions in damages. With temperatures setting record highs, a September storm could be much more powerful than IKE was.

Stay tuned and Get Prepared! We are a long way for the peak of the season.