China Gets Worst Typhoon in over 40 years – SUPER Typhoon 145 mph Winds! We next?

China is being hit with one of the strongest Typhoon’s in over 40 years  (we call them Hurricanes in our part of the world.)   It just ravaged the Philippines.

It is expected to generate 145 mile per hour winds, a CAT 4! China is not the only country in its path. 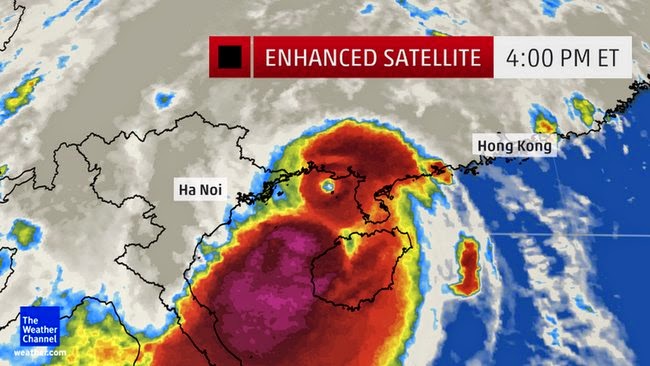 So far this year the Pacific Ocean has been generating GIANT storms, forty year events, one after another. Last year Indonesia was hit by the largest Typhoon on record. We seem to be getting 100 year storms annually now.
If it is happening in the Pacific, will the Atlantic (and Gulf of Mexico) be next?
Logical reasoning would indicate that bigger storms in the Pacific mean bigger storms coming to our side, sooner or later — and probably sooner since we have just had the three hottest months on the planet in recorded human history.
It is Mother Nature’s warning for those of us on the other side of the world to prepare for stronger, more violent storms.  This year we are seeing extreme drought in California simultaneously with extreme rain in the east. Texas is having an odd cool, wet summer instead of the normal dry HEAT. In 2011, we had a severe drought that we’ve not had in decades.
It’s all very strange.  We are now seeing tornadoes in places that have never seen tornadoes, like New York. Weather has become unpredictable and excessive.
The best advice is to prepare for the worst and hope for the best.
Preparing means armoring the weakest link of your building – your glass. It is so fragile burglars love it and a child can easily break it.
It is wind-borne debris from hurricanes and tornadoes breaching a window that leads to roof uplift and structural failure. One engineer told this author that winds entering a hole in the window could generate 50,000 lbs of uplift on a roof! Armor Glass is designed to prevent that breach, avoiding the internal pressures that blow out walls at the worst possible time. At the same time it keeps out rain, mold damage and avoids months of reconstruction.
Armor Glass security film is lowest cost option available to protect your house, office or school. Shutters or impact glass costs three to ten times MORE. And unlike impact glass and shutters, Arrmor Glass security films save enough energy to pay for itself over time. It would dramatically cut insurance losses and injuries–as you can see from prior entries in this blog.
Congress used to give a $1,500 tax credit for installing it, but since homeowners don’t have lobbyists they phased them out.  “Armoring windows” across the country would generate thousands of jobs, increase safety in homes and schools, reduce storm damage, while cutting people’s electricity costs up to 30% and carbon emissions along with uncomfortable solar heat and dangerous UV. It’s a win-win-win. It obviously makes too much sense for Congress to grasp it as a huge benefit for Americans and our pocketbooks.
Get a FREE quote before a CAT 4 or burglar turns up at the door. Don’t leave home without it! Don’t be home without it!
Our new mini EBook “Houses of Straw…” will be out soon.  It will be FREE.
Click “Follow” to get notice when this insightful book will be available. It has numerous photos showing how this technology protects your family and biggest investment in ways you never knew…