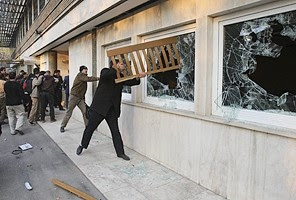 The photo is a picture of Iranians breaking glass at the British Embassy in Tehran, Iran. Notice that the glass is definitely broken, giving the culprits easy access to the interior of the building.

But whether it is Iranians, rioters or just the ordinary everyday burglar, it is another example how Armor Glass security film protects people and property from intrusion through every building’s weakest link – its windows.

It is the same film that was installed on Washington DC federal buildings after 9/11, including the Pentagon. But it doesn’t cost a Pentagon price. We put it on a lady’s house last summer. Five (5) days later someone tried to break in – and failed.

Armor Glass security film has done the same thing countless times –keeping vandals at bay. At the same time it also reduces solar heat and protects from hurricane force winds, making it unnecessary to “board up.”

Who needs it? Anyone with glass windows….Call us today for a free quote.