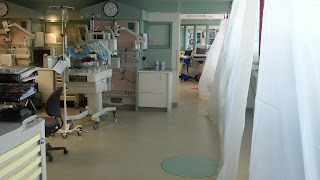 I have just returned from the Midwest where we installed our Armor Glass security film on the windows of a hospital ICU for premature babies – a unit that has a wall of ordinary windows that, if hit by flying debris during a tornado or windstorm, could blow glass shrapnel all over the little patients and their nursing staff, causing serious injuries or death.

We were told that when they get a tornado warning they usually move the babies to a hallway but that some babies could not be moved at all even during a storm. They also said the hallway does not enough electrical outlets for all the equipment needed.  So, they sought us out as a solution to their quandary.
Less than 50 feet away and slightly lower than the windows was a roof of another building with gravel on top. That gravel would become deadly flying debris during a tornado event, threatening to hurl its way through the glass. That would allow hurricane force winds and glass fragments to fill the ICU if left unprotected. Glass is the building’s weakest link, so it needs the most attention to secure any building from violent intrusion, by human or Mother Nature.
In the ICU rooms, I saw the tiniest little humans all hooked up to tubes and ventilators and other equipment, some kicking their little feet just a couple yards from where we had to do the work on the windows.
Lining the windows was their computers and supplies, which we had to carefully work around.  A contractor hung plastic sheeting to isolate our work area from the infants. Over a dozen preemies were there as we did our job, some with parents holding them.  My main concern was that when we bonded the film to the frames with our sealant that some of the temporary fumes might interfere with their breathing – that is why I was there, to make sure all went smoothly.  The hospital engineer worked some magic by increasing the air flow and we had no problems.
Now that we have “armored their glass” with certified film that has passed both Small Missile and Large Missile (4.5 Lbs Level “C”) tests, as well as Level 2 explosion tests, they are as prepared as possible for the next big storm, at the least cost. Shutters would have cost ten times more and would have been nearly impossible to install on the 5th floor were the ICU unit was located.
At the same time the film will cut their solar heat (up to 79% depending on the film used) and 99% of deadly UV that destroys furnishings and causes skin cancer.
It was an honor that Armor Glass was picked to protect this ICU and its tiny patients just starting their lives with enough drama without a storm risking their fragile existence.
For updates click “subscribe” or “follow.”