The weather is beginning to remind me of those hokey disaster movies, but for real. Protecting our buildings is becoming a priority to deal with it.

We’ve had triple vortex tornadoes running wild in places where they are rare, more than double the usual number of these killers in a season.
We have one of the longest Droughts on record, baking places like (formerly wet) Houston, while the Midwest suffers the worst flooding in recorded history from big rivers Missouri and Mississippi. Isn’t it strange to have ALL of them happening at the same time?
Because warmer air means the molecules can hold more moisture, some snow caps are three to seven times larger than normal. More snow to melt leads to record flooding in the big rivers when the heat melts it. 500 year floods could become a regular event, even annual! But that snow doesn’t do a thing to dent a spreading drought in the southwest.
Nor does it impact hurricanes, which are posing a greater threat as the waters that fuel them get warmer. Hurricanes are earth’s mechanism to cast off excess summer heat from its equator to the cooler poles. The warmer the earth, the greater the fuel, the bigger the storms. Adding heat to the ocean waters is like throwing gas on fire for these State-sized tornadoes. The hotter air generates more energy, more energy that has to be spun off by the hurricanes whirlpools of screaming winds. CAT 3 and 4 storms could become “normal.” Compare that to Houston’s IKE, which was a CAT 1.
Houston was 99 and dry as a bone today. Houstonians couldn’t see what Corpus saw this morning – the dark edge of Tropical Storm Arlene which is whipping Mexico with 15 inches of rain. If they could have seen it, it would have been a reminder not to delay in armoring their shelter from strong winds yet to come. Hurricanes are an annual threat for half of the year, every year. Coastal resident cannot afford to be complacent or assume nothing will happen.
The Atlantic from where most U.S. storms come from is 2 degrees warmer than normal. That may not sound like much, but 2 degrees is jet fuel to a hurricane. The warmer the water, the greater the energy feeding the tropical depressions that form over the ocean before they become a Katrina or a Rita, or another threat to our castles.
2011 video is evidence of a record number of multiple vortex, mile-wide tornadoes that stayed on the ground for up to hundreds of miles. If tornado season is that bad, what’s hurricane season going to be like?
And we haven’t even gotten to the dangerous part yet.
Hurricanes (and tornadoes) will blow down the houses of today’s little piggies (and humans) that don’t have protection on their weakest link – their windows. The”Project Safe Windows” study of the 2004 four hurricanes that hit Florida showed that it is window breach caused by wind-borne debris that led to structural failure, not to mention internal damages from water, etc.
The choices are limited. )nly one solution makes economic sense.
The choices are either
(1) super expensive shutters (that wont cut UV or save energy or stop a burglar in the up position) or
(2) heavy, expensive impact glass that looks like a coke bottle, requires special frames and can’t be made very big, OR
(3) a high tech security film that keeps hurricane winds and burglars from breaking in, prevents water and wind intrusion so you don’t have months of mold and water issues to deal with, and pays for itself by cutting solar heat, and protects you from the fading and skin cancer caused by UV rays. That’s the Armor Glass security film solution.
With Armor Glass protection you never have to “board up” again!
How COOL is that? (Unless of course, you LIKE the idea of trying to bench press 100 lb. large boards up a ladder to a second story window in a high wind! We’ll look for you in the next county!)
Or the hospital..! No, don’t go there. Protect your class act with Armor Glass.
Stay tuned.

A study by the National Center for Atmospheric Research estimates that the bottom-line cost of all the meteorological craziness is a staggering $485 billion per year in the U.S. alone, as much as 3.4% of the country’s GDP.

“It’s clear that our economy isn’t weatherproof,” Jeffrey Lazo, the study’s lead author, said in a statement. “Even routine changes in the weather can add up to substantial impacts on the U.S. economy.”
Which is a good reason for business owners and homeowners to “Armor Their Glass” the weakest link of buildings. Hurricane IKE, for example, caused billions in damages from bother rising water and window breaks – the Chase Tower sustained over $5 million in damages when windows were sucked out of their frames by the vortex winds created by IKE. Armor Glass film with frame attachment would have kept those windows in place, even if they were broken.

Weather experts at NOAA say that there is a 90% chance that the tropical wave will become a tropical storm in the Gulf of Mexico within the next 48 hours. Most likely target: Eastern Mexico, unless it makes a turn to the north.

Stay tuned during the 4th of July weekend… 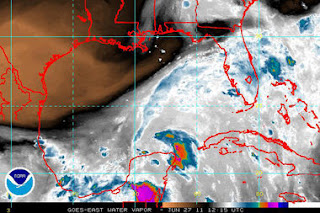 Tropical wave forms in Bay of Campeche. May or may not strengthen into Tropical storm…

“A broad area of low pressure over the Bay of Campeche associated with a tropical wave is producing disorganized cloudiness and showers. Upper-level winds are currently not conducive for development, however these winds are forecast to become more favorable over the next couple of days.”
Details at the link…

Today I found myself in the clouds, watching spinning wheels. On the top of a Houston skysraper we went through a maze, a prestigious law office, ladders, a steel door – and the top cooling tower machines that keep a modern building alive in the 21st century.

And there were no windows, just the rush of air flowing by, at the very top.
It was a scene from another planet, but it was all too real in downtown Houston. If these machines malfunction, the building dies.
The scene was so fascinating. Alice in Wonderland is not much better. One small ladder led to a wood door, which led to another small wood door, one after another. And in each room, above us a giant spinning wheel spun furiously, rushing the wind past us. Below us, shallow water swirled. When I looked up, the sky was spitting water on us, like an errant sprinkler, as we got our first kiss of rain in months from fickle skies. I wondered what a full thunderstorm would feel, pounding the place where I was standing, next to giant machines doing mysterious things.
That was what I did today. It was fascinating, even when it required climbing ladders straight up into the next level of Alice in Wonderland…
Life just keeps getting more interesting. Never would I thought I’d spend a day in the clouds, watching spinning wheels keep thousands of people below comfortable in their artificial world…

Last week I gave a presentation to AIA architects in Houston. At the beginning I asked the group of about 25 people “How many know about ‘security window film’?” About four hands went up.

That’s a pretty low percentage. It is only slightly better then the one person who raised his hand when I asked the same question during a similar presentation to AIA members a year or so ago.
When I bought my Clear Lake condo in January of this year, the real estate agent I worked with was originally from Florida. When he saw my car signs he started telling ME about security window film!
Very interesting – real estate agents from Florida are more familiar with the latest Hurricane protection technology then Texas architects. How can that be?
If the architects don’t know then how can a client building a building know how to protect it?
However, how can they know if no one informs them? The editors at Texas Architect magazine in Austin have shown no interest in publishing an article we submitted, explaining what security window film is. This is despite the fact my co-author works for NASA and went into detail on the engineering aspects of it. The article wasn’t about our company; it was about the technology and how it pays for itself in energy savings while protecting people and property from window breaks caused by wind-borne debris, burglars and explosions.
Impact glass is too expensive for most projects and its impossible to design impact windows in large panes. We are building glass palaces in a hurricane zone with ZERO protection from window blow outs. Heavy plywood is not an option, nor are expensive shutters on glass towers.
The windows of Chase Tower, for example, were SUCKED OUT by Hurricane IKE, costing millions in damages. Our Armor Glass security film, with frame bonding, would have kept all of them in place, even if broken! That is, it would have saved countless offices from being destroyed by the hurricane, along with the destruction of the surrounding buildings caused by the flying glass shrapnel.
I will say this. At least this year they seemed to be listening.
We are in the high tech 21st century. If we aren’t technology leaders then we are in serious trouble if we expect to compete with the rest of the world. Security window film has been on the federal buildings in Washington DC for a decade now! It was first used in the 70’s in Northern Ireland when the IRA was setting off car bombs that blew out windows.
I’d like to see more curiosity by our professionals to stay on the cutting edge of technology. By doing so, we could save billions in future storm losses, simply by incorporating technology like ours in existing and new buildings… 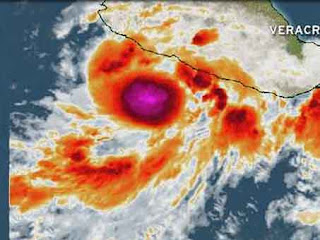 It’s early in the Hurricane season and the eastern Pacific off Mexico has already produced two storms – Beatriz is pounding Acapulco so don’t plan a trip there this week!

And there are signs that the Atlantic is starting to get active. Are you prepared?
With record high temperatures and the thought of lugging heavy plywood in the heat, think about a more civilized alternative – a hurricane film that also cuts the HEAT!
Contact us for a free quote today – BEFORE the next hurricane fires up. It’s a LONG way before the season ends November 30… 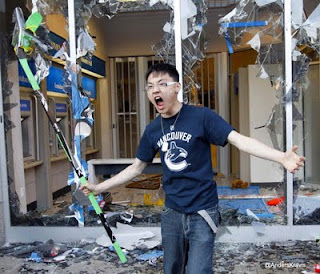 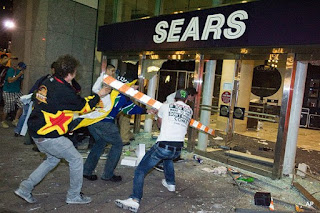 Too bad the businesses in Vancouver did not have Armor Glass security film on their store fronts – it would have kept the rioters from breaking in and carrying off inventory.

We recently installed it on a major pharmacy that had a break in – in 3 minutes the thieves walked out with thousands of dollars of narcotics. Glass walls are no barrier to theft. But they are if you “armor” them with Armor Glass security film…

It’s OFFICIAL. Armor Glass® is now officially registered as a trademark with the U.S. Patent and Trademark office. I highly recommend Wendy Buskop’s law office which helped make it happen.

So HOW do you get both hurricane and burglar protection AND solar HEAT relief? With Armor Glass security film.