The bad news is that Alex has become one of our earliest seasonal storms in 2010. It is now a CAT 1 hurricane that may become a CAT 2 before landfall.

The good news is that most of the target zone appears to be in northern Mexico, but Texas is still in line to get the “right punch” or the “wet” side of the storm.
Do you know what the current procedure is for NASA during a hurricane? It’s simple. Any office that has an office and a computer – a garbage bag is placed over the computer. Yep. That’s the procedure. Ask any NASA employee for verification.
I was watching the TV video of people in South Texas driving nails and screws into their houses for plywood. Boarding up windows is as yesterday as using a garbage bag to protect a computer in the event the windows blow in, damaging files and causing massive water damage.
I am trying to protect NASA and Texans with more advanced technology, not insult them. But the sad truth is that Texas still lags Florida in adopting newer hurricane technology like security window film which we call “invisible shutters.”
Armor Glass is providing 21st century hurricane technology that lets you forget the plywood and the garbage bags. And it saves energy and cuts out cancer causing UV at the same time. Garbage bags and plywood don’t do that.
Check it out on our website at www.ArmorGlass.com BEFORE the next Alex comes our way…we will inspect your windows, show you the film choices and provide a free quote. Just email us to check out this technology that protects from burglars as well as solar heat and hurricanes.

It appears that ALEX is back to being a tropical storm and is predicted to be a hurricane by late this week – hitting Mexico or South Texas.

We have installations set for Harlingen but not until the storm passes. In the meantime a lot of people will be having to do that nuisance job of boarding up – except our customers who have 24/7 protection and don’t have to do a thing.
Standby for updates. The good news is that ALEX will miss the eastern Gulf of Mexico which would have required suspending oil clean up efforts. There are new technologies that could help in that effort IF they are employed.
Standby… 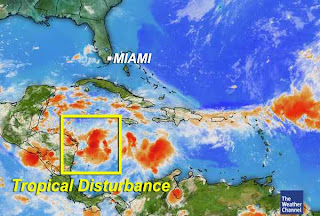 The tropical disturbance in the Caribbean is showing signs of getting organized and will be dumping heavy rain on places like the Cayman Islands, Cuba, etc.

It is still “in the slot” that could bring it into the Gulf of Mexico as a tropical storm by the time we are starting the 4th of July weekend.
Our crews are booked up to the end of July already.

Our first Atlantic tropical wave of 2010 that could affect the Gulf of Mexico has formed.

Although it is too early to tell what it might do, it is in that “slot” that puts us on the potential receiving end if it does form into something like a Tropical Storm or Hurricane.
We are booked solid on Armor Glass security film installations for the next 2-3 weeks. If this does become a storm, all hell is going to break loose: A hurricane threat means a lot of people will be scrambling to find and nail plywood on their houses.
But not our customers. They already have “invisible shutters” installed — our security film. And its saving them energy (i.e. money) and protecting from break-ins at the same time they wait on the inevitable storm…The 2004 “Project Safe Windows” study of the Florida hurricanes determined that a window breach from wind-borne debris leads to roof uplift. Internal wind pressure destabilizes a house during a storm. Our film prevents that breach (up to the large missile size–4.5 lbs) even if the window is broken.
This is just the beginning of hurricane season. It won’t peak until mid-September – and doesn’t end until November 30, so it’s early.
Are you prepared? 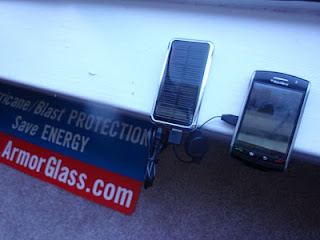 An exhibitor in a booth near us was selling this solar charger (left). I tried it today and it charged up my Blackberry in no time, just from the sun! I didn’t even have to put it near a window.
I highly recommend people get one of these as a way of charging your phone, iPad, even laptop when the next storm knocks our electricity. Put it in your hurricane emergency kit.
A company called Amzer in Sugar Land is selling them for about $70. Check it out at:
www.amzer.com or www.fommy.com. I was using my car to charge up the phone after IKE but this is much better and requires no gas!
My car was reading 97 degrees today!
Armor Glass Security tint beats the heat and lets you throw away the plywood at the same time! 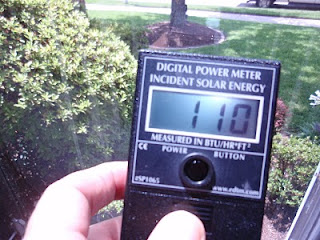 “Wow, it is so much COOLER in here!” That was the comment I kept hearing the past few days as our crew methodically covered their existing glass with our film. Not only does it cool the houses, it also eliminates the need to plywood the windows during future storms. 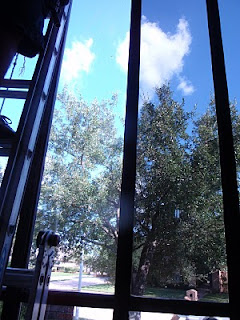 Photo 1: Notice the BTU reading of 110 – heat coming through the glass BEFORE we cut 70% of it by installing our security tint.
Photo 2:
Notice the GLARE on the bare glass pane on the LEFT window pane versus the nice crisp look of our hurricane security tint film on the RIGHT window, which cut the solar heat coming in by 70%!
“Wow, it is so much COOLER in here!” That was the comment I kept hearing the past few days as our crew methodically covered their existing glass with our film. Not only does it cool the houses, it also eliminates the need to plywood the windows during future storms.
We have daily installations scheduled and it is making for LONG days. I have been getting in at 8 or 9 p.m. from places like Galveston, Pasadena, South Texas, etc.
People are realizing that they get a “3 for 1” with our security film: Energy savings, solar heat relief and hurricane protection – all at the same time and for a fraction of impact glass or shutters.
Open shutters and fabric sitting in your garage doesn’t screen out UV 24/7 or block entry to burglars used to easily knocking out glass. Our security film does. And it looks so much nicer than those ugly fabric things people have to hang on their windows from the outside, even if they have a two-story house!
We are already booked solid into mid-July. September 10 is the peak of the Hurricane season. It’s hurricane season. Get yourself a free quote from one of our sales reps and get on the installation list, before the next storm comes – and save energy and get solar relief immediately. 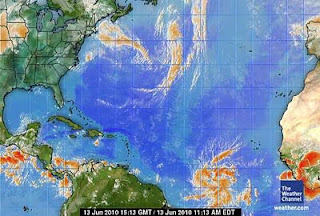 A new disturbance is being watched in the Atlantic. We quote from the report:

“ a tropical wave is located about 800 miles southwest of the Cape Verde Islands and is showing signs of organization. It is far enough south that it is moving over relatively warm waters and upper level conditions appear to be somewhat favorable for development. While it would be unusual for this system to become a tropical storm east of the Lesser Antilles (it is forecast to reach them towards the end of the week, whether it’s a tropical wave or more), it is not unprecedented. Tropical Storm Ana in 1979 first became a depression near where this system is located now.”
Stay tuned –

Our backlog is building up fast. We are now into booking installations of our hurricane-solar combo film in the 3rd and 4th week of June.

The HEAT is already intense and this is just early June! Most of our customers are going for the joint solar-security film. Some even want the Silver that rejects 79% of the heat, mirror effect or not. Others are picking either the Clear or our stainless film that is guaranteed to work with double paned windows.
We have a Sales Rep! His name is Jay and he used to sell windows – until he show our film sample taped to a customer’s window. The new windows were going to cost $11,000 for that house. The quote for our film was $4,000! He told them to buy the security film – then he called and said he’d rather sell our film than windows! I gave him a job and he’s selling three out of every four houses he visits.
Even if the customer had bought the new windows, they would still have to put our film on them to make them impact resistant! Two panes of glass do not make them impact windows – it only means that the debris or burglar breaks two panes instead of one to enter your premises.
The great thing is that our film “Armors Your Glass” whether it is single pane or double pane, and rejects from 50% to 79% of the solar heat coming through your glass, and 99% of the harmful UV that causes fading and skin cancer.
All of this for a fraction of the cost of shutters and you never have to put up plywood again!
Armor Glass films are a win-win-win.
The following is copied from source Climate-L:

The Atlantic hurricane season has officially started, and the International Research Institute for Climate and Society has issued its updated seasonal hurricane forecast for the region. The results continue to indicate that an above-normal season is very likely….
The IRI’s hurricane forecast probabilities are the strongest the institution has ever issued at this point in the season, eclipsed only by a late-season forecast during record-setting 2005. The latest numbers call for a 50% chance of above-normal activity, 35% chance of near-normal activity and a 15% chance for below-normal activity. Put in simpler terms, this means that the chance of having an above-normal year is more than three times the chance of having a below-normal one.
The hurricane forecast issued last week by the National Oceanic and Atmospheric Administration is even stronger, calling for an 85% chance of an above-normal season.
Although the forecast calls for an active season, this doesn’t guarantee that devastation will occur. The seasonal forecasts don’t tell us where, when or if the hurricanes will hit land. They just tell us that we’ll likely see more of them this season, increasing the odds that some inhabited areas will get hit.
Because of the potentially destructive nature of hurricanes and tropical storms, the higher odds are a cause for concern…You can read the rest of this story here:
http://iri.columbia.edu/features/2010/an_active_hurricane_season_predicted.html

It’s HURRICANE season officially. It’s going to be an 18-hour day, and may stay that way until fall.

Agatha killed over 150 in Central America.
Busy season forecast ahead. Few are prepared for it. Time is not your friend until the season ends November 30.