The first Pacific tropical storm has formed and will hit parts of Mexico and Central America…Tropical Storm Agatha.

And we haven’t even reached the official starting date for Hurricane season – June 1!

It’s out – the 2010 Hurricane Forecast – up to 14 storms are predicted (after Zero action last year).

We are already working 24/7 to keep up with demand. Even shipping export orders, which creates jobs here.
I don’t even have time to keep up the blog it has been so busy…Do you REALLY want to lug plywood again this year? It’s so old tech, and HEAVY.
Going to security window film is such an upgrade – being prepared 24/7 versus having zero protection and lugging heavy wood up and down, up and down…!

After an all day hurricane conference on the tip of Texas (in McAllen), I was too tired to move, so I watched a NOVA program on hurricanes.

I learned that even a 1/2 degree increase in the ocean temperature adds enough fuel to generate more CAT 4, CAT 5 storms. This year the Atlantic Ocean waters, the breeding grounds of our hurricanes, are the hottest on record.
Second, hurricane activity goes through cycles. It varies from a “slow” cycle lasting 15-20 years to an active one that also lasts 15-20 years.
Starting in 1995 we entered an “active” cycle — which will last for the next 10 to 15 years according to the experts. Combined with warmed oceans we could be in for some major pounding from future storms. Consider this: IKE was only a Category 2!
Our building codes will need to be upgraded big time.! Time to “Armor Your Glass” – the weakest link of any building.

It’s HOT again. I went to the McAllen Convention center this morning at 9. They were just opening the doors. Very little rain has been falling from what people have told me. It was 94 degrees today – and will be in the mid-90’s all week!

McAllen is a Beautiful city and has a beautiful convention center. I set up the booth and then did something I’ve never done. I started putting Armor Glass 8 mm security film on my own van — right then and there. I wanted to “Armor its Glass” — because of the proximity of Reynosa!

Normally this 8 mm life saving stuff goes on houses and buildings so you can throw away the plywood, not cars!! But they use a very thin film on cars –(2 mm or even a 1.5 mm). I wanted a THICK 8 mm film on mine! Basically I was putting on the same film on my van that was used on the DC federal buildings after 9/11.

I got a little too engrossed in the installation. I heard something and realized that they were about to box me in with fire trucks and tents and exhibit vehicles! I got out fast and pulled under a small tree in the parking lot –and finished putting CLEAR 8 mm security film on the inside van windows–to stop more ‘smash and grabs’ like what happened to my GPS after I first got the Montana (if I’d known then how fickle TomTom was, I would not have missed it so much).

Coming to the increasingly wild west border made me quit stalling and get into action mode on my own vehicle–armoring its weakest link, its glass.

Normally you can’t put something as thick as 8 mm on a car – car tint is usually 2 mm or LESS. But I wanted SECURITY film not just flimsy solar film on my personal vehicle. When car glass gets struck with a hammer, etc., it wants to break into a thousand small pieces that normally fall in — and pile up on your car seat –while the thief is grabbing and going.

But with the 8 mm film on the (inside) car windows, the film –and its adhesive– will bond the small pieces together, forming a barrier to penetration – versus none (which is what everyone has.) It will definitely be a game changer from the usual “hit the glass, grab and run.”

The guy who put in my replacement car window said that he was busy replacing car windows because people leave computers or valuables in view in the car (like my GPS) — and in 10 seconds even a poor thief with anything hard can smash the glass, reach in, grab the item — and be gone. All in 10 seconds – UNLESS there is a barrier. Armor Glass security film provides that barrier.

The same film is actually bomb blast rated film. Although I don’t expect to need it, it is still nice to know it comes with it! Whoa! I just saw a local TV news item about someone leaving a “homemade bomb” in the middle of a street in McAllen. No kidding! Well, maybe we’ll need that bomb blast protection after all….! Holy smokes.

It went on fairly well today, considering that I had to do a first-ever car install without my crew (who do buildings, not cars.) I finished by noon. When I looked down the front of my Armor Glass shirt was soaking wet.

So I broke for lunch, then went by HEB to pick up some wine and a frozen dinner for the room microwave!

We are facing an ‘above-normal’ hurricane season. Get your house prepared before it comes. Doing that will give you a bonus 24/7 ‘smash and grab’ protection for your house (with or without the wine). I can’t tell you how many people are reporting bricks thrown through their glass by burglars.

It’s official: It was the Pakistan Taliban who were behind the New York Times Square car bomb attempt.

While allied with Al Qaeda, the Pakistan Taliban are totally separate. This opens up a new threat of Pakistan militants moving beyond Pakistan to directly hit targets in the U.S. And to do it they are recruiting U.S. citizens who have been “radicalized.”
It also means that the next target could be any city or state, a synagogue, a sporting, any downtown, medical center – anywhere in the U.S.
Hundreds of people would have been injured or killed by flying glass if the NYC car bomb had gone off.
In addition to that threat, in less than three weeks the 2010 hurricane season begins – and runs until November 30.
But if you are prepared you don’t have to worry as much. Your best offense is installing a good defense – hardening your building’s glass with certified, blast-rated, security window film.
It costs nothing to get a quote. It could cost you quite a lot not to get one… 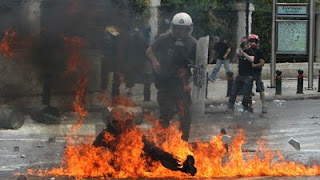 During riots today in Greece, protesters threw a firebomb threw a plate glass window of a bank, and burned to death three people including a pregnant woman.

Armor Glass would have prevented the firebomb from entering the building. It would have saved three lives — had it been installed on the bank’s glass before this incident.
If a car bomb or firebomb was thrown in any city at any building’s glass, the result would be the same UNLESS they had protected their building with Armor Glass Security film beforehand…

Had a 19-hour day yesterday – and starting again early this morning. Yikes!

It now appears we may have a Pakistan link to the NY bombing. They picked up a guy who was already on an international flight taxing out (IF he is part of the plot). That means civilians are the target, so anywhere could be next.
And hurricane season is less than 30 days away.
Like the scouts say “be prepared.” Get your location hardened – BEFORE there is flying glass.
It makes the difference between living and not, or property damage or not.

Video just released in New York show that the driver of a SUV that contained makings for a car bomb was a “middle-aged white man. ”

This means that it was NOT the work of Al Qaida. Instead it could be a Tim McVeigh ‘wannabe’ – a domestic terrorist.
That makes the threat MORE dangerous because the target could be anything, anywhere – Times Square today or the corporate offices of an oil company or bank or a hospital tomorrow – who knows.
“last year four New Yorkers went on trial accused of plotting to bomb synagogues in the city and fire missiles at military aircraft.“
Bottom line: Security protection is needed more than ever. Today we have a toxic political climate that has started to set off the fringe nut cases.
Be prepared! While this bombing was not successful, the next one could be. 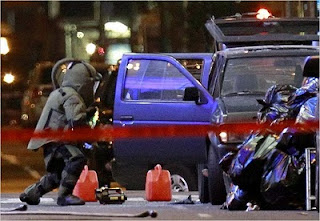 It was a matter of time but the car bomb has come to America.

The smoking SUV found in Times Square packed with gasoline, propane tanks and wires opens a new era. This is different from the Tim McVeigh truck bomb in Oklahoma –this one targeted civilians, not a federal facility.
Had it detonated people would have been killed in two ways: some by the direct blast but many more who would have been killed or injured by flying glass shrapnel as they sat in cafes and stores around the blast area .
We got lucky on this one but it won’t be the last attempt. I guarantee we need to “armor our glass” to avoid more people being killed from flying glass than by the explosion itself.
Last week I talked to a man from Northern Ireland who told me that when the IRA was setting off car bombs in the 70’s that they started using security window film at that time — because of the danger of flying glass.
Our security films are explosion-rated, as you can see from the 2 minute video on our website at www.ArmorGlass.com
Every store owner should have it installed — not only to protect from a future car bomb but also to protect from “smash and grab” crimes, hurricanes, etc.