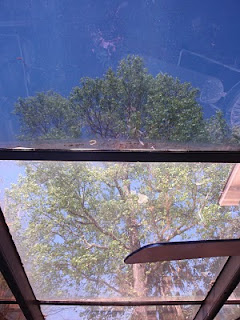 Yesterday I worked on a pro bono project for a lady who has MS and an atrium that gets so hot that they have to run the air conditioner to keep their birds alive in the summer. Her electric costs were sometimes as much as $1,000/month!

So we installed our Silver 20 security film on the ceiling of the atrium glass – it rejects 80% of the solar heat and it also keeps the heat off the glass. Before installing it we had to scrape off the old bronze tint which was dried and peeling. It was easy to pull the top part off but brutal to get the glue off.
But after getting the new film installed the difference was dramatic. The bottom of the pane with the old solar film was HOT to the touch, but where we had installed our Silver 20 the glass was much cooler.
By the time we finished she said that she could tell how much cooler the room was with the new security film.
And since I don’t normally do installation (my crew normally does these thing but this was my pro bone project and they are working on another job), I discovered muscles that I don’t know I’d had for years! Putting film on a ceiling and defying gravity is not for the faint of heart. The lady’s unemployed husband was helping and we probably looked like the Marx Brothers in action. But we got it done and she was happy. LOL.
Now the lady and her birds (not to mention her children, grandchildren, husband, etc.) will have a much more comfortable, and secure, summer. 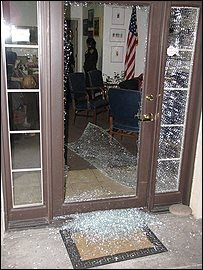 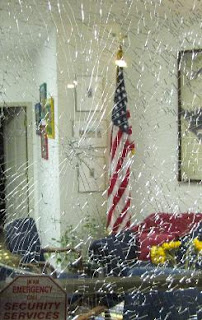 Over 1/2 million sq. ft. of Armor Glass security film was installed in Washington DC after 9/11.
Now it is needed to protect local Congressional offices attacked by vandals unhappy with how their Congressional representative voted.
What’s next? A bomb blast? Americans attacking Americans?
Armor Glass security film has passed the GSA 3a/3b blast test. And the large missile test (e.g. bricks, pavers). And the hurricane tests. It would have prevented millions in damages to the buildings in Houston that lost windows during Hurricane IKE.
We have been getting a lot of calls and emails from people who have had break-ins by the other thugs out there. They are throwing bricks, pavers, etc. through the glass. It isn’t hard for them to breach your privacy, mess with your stuff, and worse…
Whether it is a brick thrown by a local thug, a vandal breaking glass to make a point, or hurricane-force winds, more and more it is becoming clear how much people, companies and governments need Armor Glass security films for protection from threats both human and from mother nature…
I recommend getting Armor Glass protection before it happens to you.

The beginning of our spring is the beginning of fall south of the equator, the peak of their storm season. We call them hurricanes. Our peak is mid-September.

South of the equator they are called Cyclones – and a 120 mph one just hit Australia.
Mid-March is their peak for the same reason mid-September is ours. The waters are the hottest from summer. Hurricanes-Cyclones-Typhoons–call them what you want–are earth’s mechanism for transferring that heat from the equator to the polar latitudes (Arctic for us, South Pole for Australians).
Given that Australia just had the hottest summer in a half century, and slapped with a Category 3 at the end of it, it is possible that when our turn comes this summer, the same end could be the result.
Don’t expect another pass like we got last year because of El Nino. Are you ready for a Category 3 storm blowing in your windows? June 1 is now a little more than two months from now, and we already have a backlog.
Until you have security film on your windows (or much more expensive shutters), you are not ready for our annual threat – Hurricane-force winds.

It’s summer south of the equator – where they call Hurricanes “Cyclones” and a Category 4 is now pounding the island of Fiji. Winds from Cyclone “Tomas” are up to 130 mph!

With our own Hurricane season approaching for the northern hemisphere, a Category 4 storm should be a warning that we may face a very strong Hurricane when its our time. Are you prepared? It’s too late to call us when the storm is coming our way.

According to this article, skin cancers are on the rise, both the serious and less serious. Skin cancer is now the No. 1 Cancer affecting Americans.

Fortunately, not only does our security film cut energy use and protect from storm and human breach, but it also screens out 99% of the cancer-causing UV rays coming into your home and office windows. 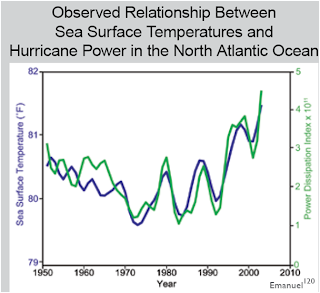 At a presentation I attended last week by Rice University Climate expert, Ron Sass, one chart caught my attention.

In short, it shows that the warmer the ocean, the more powerful will be the hurricanes produced over a hotter ocean.
Hurricanes feed off the warm waters. The warmer the water, the more of the oceans heat is pulled into the storm, fueling it into a bigger and more powerful force.
Coastal residents should counter this threat by “hardening” their homes and offices from higher hurricane-force winds that will be coming our way.
This means protecting their weakest link – windows – from breach by bigger storms, hail, tornadoes, etc. It’s too late to do it when the storm is rolling our way.
This video shows a test of our Armor Glass Security Window Film this past week. It was applied to a cheap, single-pane window purchased at Home Depot. In other words, it is just like the cheap glass most of us have in our homes. Watch the last two hits with the hammer – at full force! No penetration of the window armored with our security film.
If our film can prevent a breach of a cheap single-pane glass window, imagine what it could do for protecting your house? Even double paned windows need the protection.
Saturday I was at a new condo complex where several of the units had been broken into recently. Our film will give them protection (along with some better locks and a working alarm system) that they don’t have now – from both burglars and future hurricanes.

See this video of tests of PETN by a British outfit show that if the underwear bomber had succeeded in setting off his bomb, the 747 WOULD HAVE SURVIVED it.

Nice to know that…

A freak wave broke a cruise ship’s glass – killing two people. Our security film would have prevented these deaths and injuries – by containing the glass in the film, which is bonded to the frame with a special sealant.

Just another unique application for our unique product…